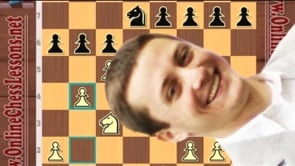 This game is a brilliant classic from way back in 1982 when Alexander Goldin was one of the most successful chess players of the Soviet chess machine. The game opens with a standard Queen’s Indian and then transforms itself into an exciting game.

Watch how 27. h6 turns the game in Goldin’s favor.

Alexander is an American grandmaster, originally from Russia, who represented the United States on board three at the 2004 Chess Olympiad in Calvia.

Early in his career, Alexander Goldin won the USSR Under-18 Championship in 1981 and was a joint winner of the 1986 Soviet Championship semifinal in Sevastopol.

GM Alexander Goldin is also a two-time winner of Philadelphia’s World Open in 1998 and 2001.

The first of the three games is from the video for you to study at your leisure.

We caught up with GM Alexander Goldin, and he was kind enough to give us an interview telling us how he became a GM, his favorite books, and more.

Watch the Chess Game between Goldin and Efimov

When did you learn chess, and who taught you?

My dad taught me how to play chess when I was 4.

When did you begin playing tournaments, and how did you do?

Can you recall a specific turning point? (a game, event, working with a chess coach, etc..)

Nothing stands out from the top of my head. Maybe the year 1981 when I worked with GM Timoshenko Genady (former coach of Kasparov) The same year I won the USSR championship under 18.

What are your top book recommendations for beginner to intermediate players?

“My System” by Nimzovitch. Also, any books on tactics or endgame studies.

What are your top book recommendations for advanced players?

How did you become a GM? (What tournaments, did you have a chess trainer, etc..)

I earned the GM title from the first attempt, winning 2 international tournaments.

-I did not have a trainer at that time but worked with many strong players.

What was your exact study regimen when you were working towards GM?

I never had any kind of regiment, study plan, or schedule. When I was young, I liked to analyze my own games. I would go over one interesting game for hours. That kind of work helped me a lot.

I always enjoyed solving combinations and endgame studies; I could do it forever.

The tournaments in the USSR were long (2-3 weeks). I played a lot and very often preferred to enjoy life rather than study chess between the tournaments.

What is next in your chess career?

I just started to teach chess recently, primarily online, and I enjoy the lessons a lot. I want to write a book at some point.[You can contact Alex for classes at [email protected]]

Nature or Nurture: Do you think top chess players are born with a natural ability/gift, or do they become so talented through hard work and the right environment?

Nobody becomes talented, you either have it, or you don’t. To become a world-class GM, one has to

B. work hard (the most important factor 90%)

How do you feel about cheating in chess? (specific deterrents/punishments?)

Cheating is cheating; there is nothing to think about. It’s illegal and comes from people’s low self-esteem. Strict rules should be in place.

Who is your favorite player, and why?

I never had one. Those who I admire most are Kasparov (simply the best of all time), Ivanchuk (super talented and independent thinker), Topalov (strong fighter, intelligent, never pretends to be someone else than he is, never follows the pack).

How to be a Grandmaster Series

People always want to know how Grandmasters achieved the extraordinary feat of becoming a GrandMaster. I noticed most Grandmaster interviews focus more on recent and upcoming tournaments and do not focus on how they became a GrandMaster.

More than just nature and nurture, there are secrets.

While most people assume that becoming a GrandMaster is only a formula of natural talent and hard work, we’ve discovered there is more to the secret formula. Our interview series hopes to unlock these “GrandMaster secrets” so we can learn to not only work harder but be more intelligent as well.

More chess interviews are on the way.

Our GrandMaster Interview series includes audio and video interviews on our YouTube and text interviews with corresponding games on our site. We hope you enjoy these grandmaster interviews. Comments are appreciated and if you have questions you’d like to ask future grandmasters, let us know.

Becoming a grandmaster is no easy task, but if you remember to enjoy the journey, the process can bring you lots of joy.

The percentage of grandmasters compared to the total number of chess players is small. The players who earn the grandmaster title have lots of chess wisdom to share with the rest of us.

We are fortunate to have free access to many of their games and thoughts about chess in our current times. By using the free online resources available and working hard, there is every reason to believe you can make significant improvements in chess.

Of course, our modern times have brought with them a lot of extra demands on our time. For the busy chess player, the GingerGM Method 01 is a great training course.

GM Simon Williams (aka. the GingerGM) has covered all phases of the game. The course is focused on making the most of your chess training time.

Learn the shortcuts that helped Simon become a grandmaster. Get 50% off and instant access to 15 hours of grandmaster instruction in the GingerGM Method 01.

Also, be sure to read: