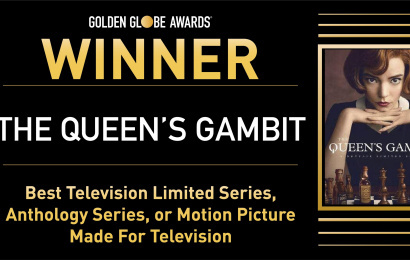 The Queen’s Gambit Netflix series has won the Golden Globe
for the Best TV Limited Series while Anya Taylor-Joy, who starred as chess
prodigy Beth Harmon, took home her first Golden Globe as Best Actress. Anya,
who faced stiff competition from Cate Blanchett (Miss America) and Nicole Kidman (The
Undoing), commented afterwards, “We played very sassy chess and I didn’t
realise I needed sassy chess in my life, but I do!”

The Queen’s Gambit was released
on October 23rd last year and within a week had hit
no. 1 in 27 countries. Within a month it had been no. 1 in 63 countries and
become the most popular limited series ever on Netflix, with 62 million
accounts watching the show. World Chess Champion Magnus Carlsen also gave his
stamp of approval.

It now seems The Queen’s Gambit is set to follow its popular
success with critical acclaim. The Golden Globe Awards, voted on by the
Hollywood Foreign Press Association since 1944, are the first major TV awards of
2021. The Queen’s Gambit was nominated in two categories and won them both.

Anya Taylor’s competition for Best Actress for a Limited
Series was formidable:

But her portrayal of Beth Harmon’s Fischer-like rise to the
top of world chess in the 1960s won the prize and she got to give the winner’s
speech – virtually, due to the pandemic:

My god Scott (Frank, the Director), I love you for letting
me be part of this journey. Thank you for trusting me with Beth. It’s wonderful
that everyone’s seen the show, but I would do this project again and again and
again. I learned so much, I’m so grateful and thank you to the audiences that
watched it and supported it and the characters. It meant the world, so thank
you so much.

Anya Taylor-Joy expanded on her feelings afterwards when
talking to journalists:

She was asked if she’d had enough of chess for a lifetime
and never wanted to see a board again:

Oh goodness, I could never say that. I love chess! I’ve had
to pick up new skills for the movies that I’ve been doing, so I’m looking forward
to having some time off so I can get back to chess. And how has my life
changed? It’s wild but I think the thing that makes me the happiest is that I
love what I do more and more with each project. I was concerned at a certain
point that that love would go away and it really hasn’t, so I’m very grateful
to still be as passionate as I am about what I love to do.

Carla Renata of The Curvy Film Critic began, “I am coming to
you from the chess capital of the world, Saint Louis, Missouri”, before asking about, “the most surprising thing you discovered learning how to play
chess?”

How much fun it is to punctuate a feeling by moving a piece!
It’s really fun! Thomas Brodie-Sangster and I did that with each other a lot. We played
very sassy chess and I didn’t realise I needed sassy chess in my life, but I
do!

Anya Taylor-Joy and Thomas Brodie-Sangster at the US Championship

It wasn’t just Anya Taylor-Joy who won, however, since The
Queen’s Gambit also took home the Best Limited Series award, where the other
nominees were:

William Horberg, the Executive Producer, noted when
accepting the award that Allan Scott had acquired the rights to Walter Tevis’
novel three years before Anya Taylor-Joy was born. Horberg also credited
director Scott Frank as “the only one I know who could bring the sexy vibe to
chess”.

The Queen’s Gambit will be competing for Emmys and BAFTA
awards in the months ahead, but for now you might want to check out more of World
Chess Champion Magnus Carlsen on The Queen’s Gambit, as he discusses some of
the chess moments.